How Do We Have Avocados Year-Round?

There are a variety of factors that have led the United States to have avocados year-round. Of course, supply and demand play a big part in any produce item becoming a year-round delicacy. But for the U.S., growing popularity, paired with the ratification of the North American Free Trade Agreement (NAFTA), allowed for an abundance of fresh avocados to be available year-round, from Florida to New York to Hawaii.

While many consider them to be a vegetable, avocados are a fruit with a dark, leathery outside and a green, creamy interior with a pit at the center. Avocados are considered a “super fruit” by many thanks to their healthy upside despite a high concentration of fat and calories. This fat, known as monounsaturated fat, is a good fat that helps to lower bad cholesterol. In addition, avocados offer roughly 20 beneficial vitamins and minerals, including potassium, folate, and vitamins C, E, and B6. Avocado’s popularity experienced steady growth throughout the early 2000s before seeing its demand skyrocket into the mid-2010s. 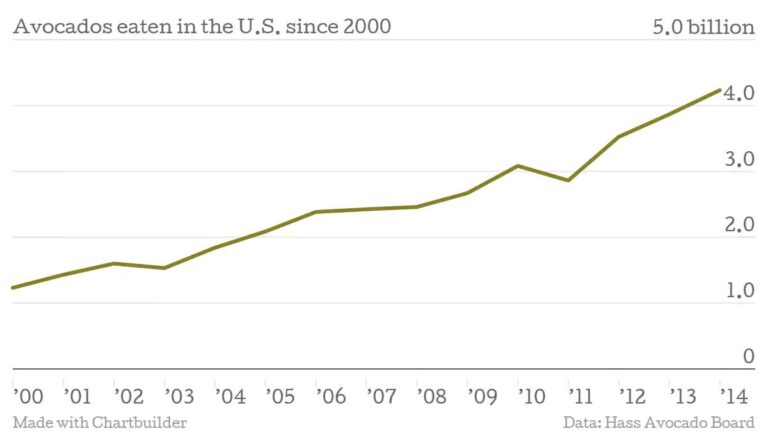 Nowadays, avocados are added to a variety of dishes, including, but not limited to, burgers, tacos, salads, various sandwiches, and even soups. Due to this rise to stardom in the fruit world, the U.S., along with many other countries across the world, have been working day and night over the last decade to ensure avocados are available in every crisper drawer on the planet. And while this may sound like a monumental task, it may be safe to say they found the answer. Avocados are currently grown domestically in California, but warm-climate states like Florida and Hawaii have each seen an increase in production over the last two decades.

How Do We Have Avocados Year-Round?

Avocados have become plentiful for a variety of reasons, but none more important than the passing of NAFTA in 1994. NAFTA, now known as the United States-Mexico-Canada Agreement (USMCA), allowed for increased importing and exporting between neighboring North American countries. Because of this, the U.S. has been afforded the opportunity to tap into Mexico’s abundance of the green buttery fruit year-round. Before this, California was slammed with trying to keep up production of the highly sought-after produce.

In California, the avocado season runs from March through September, with peak months ranging from April through August. In California, trees bloom once and produce fruit just twice a year, compared to Michoacán, Mexico, where trees bloom and produce up to four times a year. Peak season in Mexico is from October to February, but production continues through the rest of the year. Because of this, the U.S. is able to acquire and satisfy the increased demand for avocados year-round. Outside of prime California avocado season, the U.S. primarily imports from Mexico’s avocado production.

Avocados are a very unique fruit. They are in a scarce group of fruits that do not ripen while on the tree. Joining bananas in this unusual club, avocados are harvested while they are unripe, meaning they will be firm and will not be ready to be consumed just yet. Avocados grow alongside other fruits that can be weeks and months away from their own harvesting periods, making the picking process a bit more tricky. Avocados are harvested and picked by the use of clippers or special picking poles. Once picked from the tree, avocados are then taken to a designated packing house or staging area, where they will be assessed for quality assurance.

Once transported to the packing house, avocados go through a cooling phase to remove field heat before entering a long-term cooling chamber. This process is called “hydrocooling.” Once cooled and placed in bins, depending on the packing plant, avocados will then be weighed and sorted for further distribution. Due to the cooling process, to ensure ripening does not occur before their trip to the supermarket, avocados will need to be kept in a temperature-controlled environment during transport. As is the case with most produce items, experts recommend transporting avocados via reefer trailers. These trailers can provide ideal temperature control throughout the shipping process. Avocados should remain at 40 degrees Fahrenheit and, in most cases, should not exceed 45 degrees Fahrenheit in order to avoid ripening or softening. Temperatures should also refrain from dipping to 31.5 degrees Fahrenheit to avoid chilling injuries which can lead to graying of the skin and refusal to ripen following transport.

Shipping produce can be a delicate process, and there are a variety of important factors to keep in mind when choosing a freight shipping partner. At FreightCenter, we can help find the best carrier with the lowest rates for all avocado shipments. By contacting one of our freight shipping experts, you’ll be able to list all needs and requirements for your load before the shipping process. Hashing out the details and labeling your shipment‘s specific guidelines ahead of time will ensure a seamless shipping process for everyone involved. Give us a call at 800.716.7608 or run a free online freight quote today!

The cost to ship an engine can vary based on size, weight, distance traveled, and several other factors. In general, the cost to ship most engines runs from $120 – $380. Our free freight quote tool can give you a precise freight rate based on the engine you plan to ship.

The cost to ship an engine can vary based on size, weight, distance traveled, and several other factors. In general, the cost to ship most engines runs from $120 – $380. Our free freight quote tool can give you a precise freight rate based on the engine you plan to ship.