Who Grows the Most Pumpkins?

Every year, almost 25 million tons of pumpkins are grown worldwide. Who grows the most pumpkins? Illinois grows the majority in the United States. Meanwhile, China is the largest grower, while Mexico is the largest exporter, with the United States being Mexico’s biggest customer. In 2020, The U.S. harvested 66,200 acres. Pumpkins and apples are culturally used during fall, and this demand motivates pumpkin growers around the world.

Who Grows the Most Pumpkins?

One country holds the crown of “Pumpkin King”: China. China produces over 9 million tons worldwide per year. India comes in 2nd place, with 5 million tons, and Ukraine takes the 3rd ranking for producing a million tons annually. Together, China and India grow more than 60% of the world’s pumpkins.

While there are leading countries that grow, the U.S. has its personal pumpkin capital. Morton, Illinois, is accountable for distribution with 2 processing plants, yielding 564 million pumpkins in 2020. Illinois has 17k acres for growing tons on tons. In 2021, Indiana grew 10.88% of U.S. pumpkins, and California grew 9.41%, helping Illinois contribute to U.S. pumpkin production. 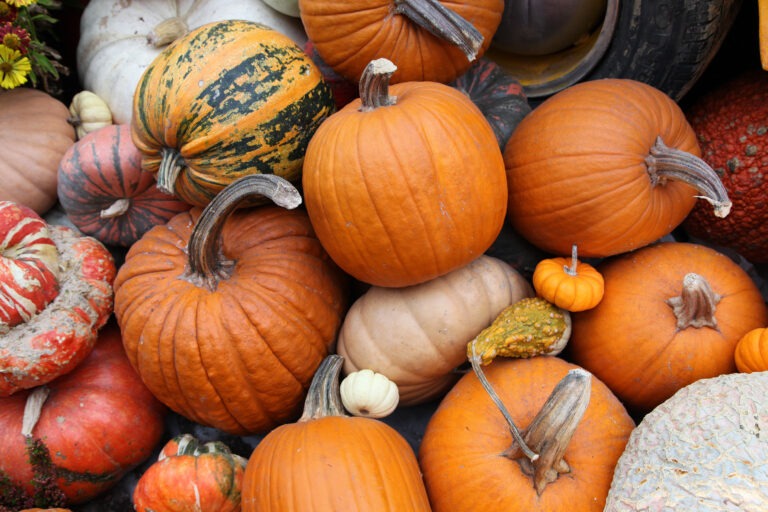 Who Ships the Most Pumpkins?

Illinois ships out the majority of U.S. pumpkins from multiple farms. The “Pumpkin Patch Fundraisers Inc.” based in North Carolina, is another top distributor in the United States. Every year, they ship millions of pumpkins to over 40 states. With high demand for jack-o-lanterns, the trucks quickly reach capacity.

How To Grow Pumpkins

If the exterior shell is hard and the pumpkin is glossy orange, it’s ready for harvest. Pumpkins are harvested on a dry day using a garden lopper. This is used to cut the pumpkin off the vine gently. If the pumpkin is so soft that it’s easily puncturable with a finger, it’s not ripe. Once the pumpkins are gathered, they’re cured by being left in the sun for 10 days. After curing, they can be stored in a cool, dry cellar for 3 months.

To ensure the pumpkins aren’t contaminated with over-ripe ones, they’re sorted apart. If cross-contaminated, they produce ethylene which will cause damage to the perfectly ripe pumpkins.

After sorting the fresh versus imperfect, pumpkins are placed in:

This is how pumpkins are packaged if they’re traveling short distances or stored. Depending on the pumpkin’s destination, further distances require durable packaging.

If shipping internationally, they’re packaged in:

These are more durable compared to Gaylord bulk bins or mesh bags.

Pre-cooling Pumpkins To Be Shipped

There are various methods for pre-cooling pumpkins.

Overall, pumpkins are sensitive to intensely cold temperatures, so they must be pre-cooled no more than 50°F.

Pumpkins are supposed to be kept cool in transit. Refrigerated trailers are ideal for shipping. On top of pumpkins being sensitive to freezing temperatures, they’re also sensitive to damage by touch. If some pumpkins are more ripe than others, they should not be placed in the same container. If they touch, ethylene that is being given off by the ripe pumpkins can ruin the entire batch. Therefore, it’s essential to separate pumpkins in the container with dividers, leaving slits of room for them to breathe (airflow circulation). Pumpkin’s preferred temperature for transport is between 50 to 55 degrees Fahrenheit. The right precautions for the pumpkins in transit are essential while shipping.

Partner with a 3PL

Getting your pumpkin supply chain the resources a third-party logistics company (3PL) like FreightCenter has means you get the most convenient, affordable and effective freight shipping solutions possible. Whether you are someone who ships the most pumpkins, or just a part-time grower, partnering with FreightCenter means you get the most reliable shipping services, a large network of your favorite carriers and shipping and logistics experts on hand. You also get the added peace of mind knowing your 3PL has won the Food Logistics’ 2020 Top 3PL & Cold Storage Providers award. We can handle all of your shipping needs. Start by getting a free online quote or call 800.716.7608 today.